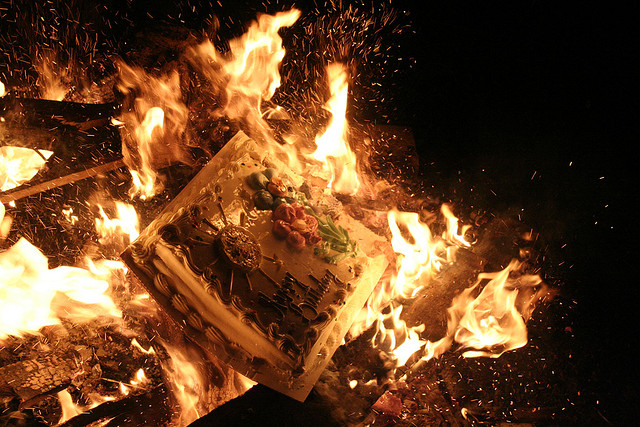 2014 was a year of growth and joy, a year of sorrow and loss. Bugbee and I watched our son grow into a vibrant two-year-old with a smoldering tongue and a keen mind. We took our first family vacation including, Earthships, green chilies and running down the concourse loaded with baggage and baby gear, maintaining the highest speed possible for someone dragging half their house. We have entered into the potty training era, Buglet’s climbing has reached new heights and I determined to spend more time in the kitchen. My one great domestic accomplishment involved drying grapes from our vine. I was intent on saving them from waste. Previous attempts at making wine failed so this year I went for something less complex. My search for a used dehydrator was unexpectedly easy (apparently drying fruit is not something people like to do year after year) but picking, de-stemming, washing and arranging the grapes was another story. Lets just say I was relieved to have usable raisins in the end.

It is true having a two-year-old can test the patience of the most steadfast adult and I fully comprehend the notion of “terrible twos” though I prefer to call it his independent stage. I’ve discovered discipline can also be a counting lesson for much of the time I end a requirement with number one, after which, Buglet will gleefully complete the enumeration making it to 10 (often skipping around a bit as he counts). But through the mayhem, the cacophony that accompanies a toddler, I maintain my sanity. I’ve learned when planning a craft “day” for toddlers one must not hold to preconceived expectations. I have also become proficient in dressing a writhing rapscallion while holding a phone between my shoulder and ear offering up ums and ohs at proper intervals. I am a master of the two-year-old pallet: cheese melted over some form of starch, crackers of any kind and the praised banana. I hold to moments when little whispers say, “happy mama” or “vivamine, have vivamine.” Although minor hysterics often follow the latter while I explain to him he can only have one, until he is four, which is in two years.

Keeping Buglet occupied during the day can be a challenge especially since the weather has turned and we no longer have the garden to occupy ourselves. We usually get out the markers and do a little drawing. After covering the paper completely Buglet will begin working on his palms and arms. I require only that the body art not enter his mouth. Keeping objects out of mouths is the most fatiguing trial of a mother. I have what you might call a sixth sense for these things. Still, there are times when even I do not have the foresight to predict an imminent consumption. Such is the story of The Puck.

For Buglet the world is a puck. He can make one out of anything; bottle caps and blocks, pebbles and pinecones. But nothing truly replaces the actual puck.  When given a replica made out of foam the child’s excitement turned into obsession and it went everywhere with us including “nap-time drives.” Some of you who have driven with me in the past will be happy to know I have learned to drive the speed limit. (Five miles over is still considered the speed limit, right?) On this particular excursion I kept my eyes peeled for the idiots driving other vehicles–for their dependably foolish choices. Therefore, I did not notice Buglet using his puck as a pacifier. It was not until a day later when I went back out to the car to retrieve the lost valuable that I noticed the chunk missing from its side. I scoured the CRV, but there was no sign of a black nugget. This left me with one conclusion. My only hope was that he’d bitten away at the foam slowly; increasing the likelihood it would digest.

Despite the fact that Buglet has an extensive vocabulary, including the words amazing and Jesus Christ, the term goo-ga has stuck, referring to his hockey stick. I am sure there is an intelligent reasoning for this that will come to Bugbee and my understanding any day now. However, we are grateful that communication is up from last year.

Buglet has made my days complete. He is my palzonie. He goes with me everywhere, enjoys trips to the grocery store or Powell’s Books, loves walks and demands to be included in the care of the dogs in our charge. He pours their measured food into bowls, hands out treats generously and “holds” the leash on short jaunts around the block.   He also can be counted on to contribute to the dusting and is obsessed with the sponge. He will wipe down just about anything I ask if only I allow him to hold the sponge, which I do, until it goes into the mouth. Often I will answer his oral fixations (and other misdemeanors, such as shooting the puck at the Christmas tree) with a shrill noise, however, my exasperation defrosts when he says, looking up at me, a full smile swelling his cheeks, “No biggy mama.”

Regardless of the adversities (that cause parenthood to seem like a beta test) I have come to the conclusion that the sacrifice of past present and future will fully out weigh the guilty stealing of a quiet moment behind a book or my laptop. In this way I stay sound of mind. And, of course, remembering to take life lightly, that hummus smeared in beautiful swirls the length of the table, jagged cliffs of blue crayon on the wall and tooth marks left in the leather couch are but tiny notions in the grand scheme of disasters.