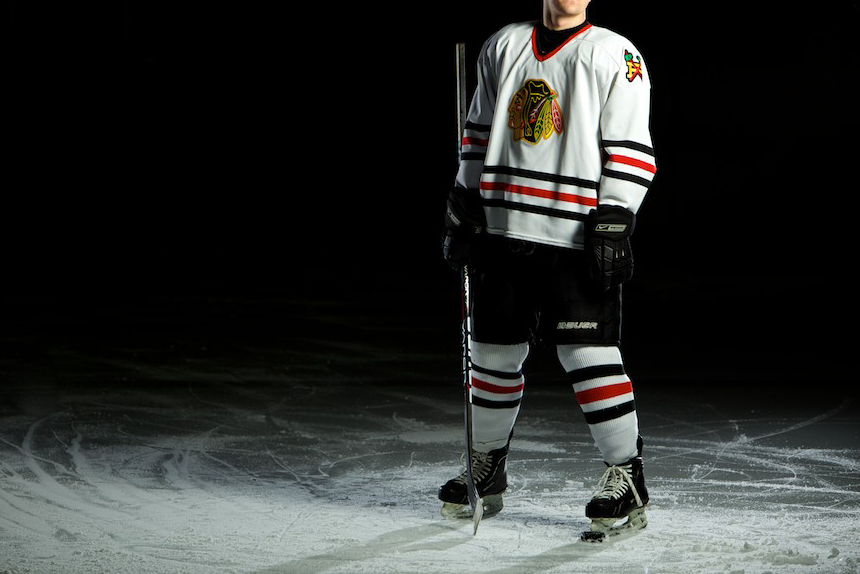 My son loves hockey.  My son is obsessed with hockey.  My son wears his hockey gloves and takes his hockey stick into the grocery store.  He begs to wear his jersey to bed, turns his blocks into De Leo and Turgeon and The Blue Penguins.  The yellow blocks are always the refs.  He tells everyone he meets he is a hockey player.  He makes me play goalie, which is scary and getting more painful and I am considering investing in some gear for myself.  Much to my consternation, we traded our CRV for a mini van and my sole consolation for having to parallel park a boat and drive it through heavy traffic is that it will come in handy some day when The Buglet’s stick lengthens.

Hockey season has begun again and I am not sad about it, after all the reason my son is a hockey fanatic is my own fault.  The Winter I was pregnant, despite feeling ill and exhausted the entire time, I went to every game.  Usually, what happened was he would settle down during play, as if the sound of skates against ice, sticks smacking puck, whistles, cheers, obnoxious music he heard in the womb relaxed him and often I would only have to vomit during period breaks.

Then came the winter he was an infant.  It was stressful changing diapers, nursing, but mostly he just slept through the game rigged to Bugbee’s chest in the the baby carrier.  It was the second and third years that were the most difficult, when he wanted to get down and swat around his toy hockey stick and bang the glass with it.  Of course, everyone thought he was adorable and he got away with murder.  This year however, he is actually into the game.  He asks “Mama, what just happened?”  “Mama, who is that?”  “Mama, where’s Bittner?”  He wants to know why he can’t go on the ice and play with them, and I tell him, you know son, they could use you right now.

How I get him to eat his vegetables and often just to eat in general, is to tell him he needs his vitamins and protein in order to grow up big and strong so he can be a hockey player some day.  Will I be sad if he chooses to be an astronaut instead?  Of course not, but the kid has talent.  As I mentioned, he’d been imprinted with hockey and therefore his slap shot is out of this world, his form is perfect and this summer, much to the weakening of my heart, he has learned how to lift the puck.  We need a bonus room.  We really, really need a bonus room, if only to save the plants.  Thankfully I have never been a nicknack person (Why make more dusting for yourself?) the only thing on our shelves are books, but the plants have to withstand a foam puck now and then, the walls are looking a bit nicked up (sorry Jamie) and the hardwood floors have to be polished everyday if I want them devoid of black streaks from the tape scuffing.

All I can say is that these are the years his brain is absorbing at such an incredible rate that learning seems unconscious, and facilitating The Buglet’s proficiency in something he naturally loves is my job, even if the house falls down, I will support his hockey habit.  How could I not when the kid comes up to me, puck in one hand, sticks in the other, a smile traversing from one fat cheek to another, “Mama you be in goal. I got your stick.”